You won’t embarrass yourself if you steer clear of the crass wedding joke books.

So it’s tempting to have a look at joke books that promise hopeful wedding MCs how to instantly wow their audience with a few choice one-liners.

Tempting but very dangerous. These books suggest you start your introduction by making fun of marriage and portraying the groom as a poor sod who didn’t know any better.

Wrong. This has Titanic written all over it. There is never any reason to tell ‘gags‘. It looks desperate – as if you are asking the audience to like you.

Avoid the ‘marriage is a prison sentence’ kind of dumb humor. And the same goes for tacky mother-in-law jokes. All the old lines are so predictable and low-brow. The guests just moan “Oh No!” and turn-off.

Instead, use the occasion itself to generate the laughs.

Remember a wedding reception is a celebration – so the event is ripe for all sorts of fun. There are many moments of joy where the emcee can use their personality and sense of humour to highlight and illuminate the scene often happening right in front of the audience.

From the cuteness of the children sliding along the floor in their new suit of clothes to the bridal party entry funky dance moves to the photo booth craziness to the cutting of the wedding cake group involvement.

It’s everywhere. All the MC needs to do is recognise it and then bring the audience’s attention and focus to it.

Unless you have a clean, well-rehearsed, original and scripted routine especially tailored for weddings, steer clear of the old lame attempts to create amusement; perpetuated in the insensitive joke books. 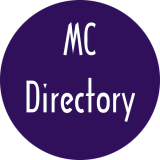 My total obsession is to help speakers to expand their awesome live presentation skills and work as entertaining and organised emcees at elegant wedding receptions.

I do this via my event host masterclass and online mc directory.